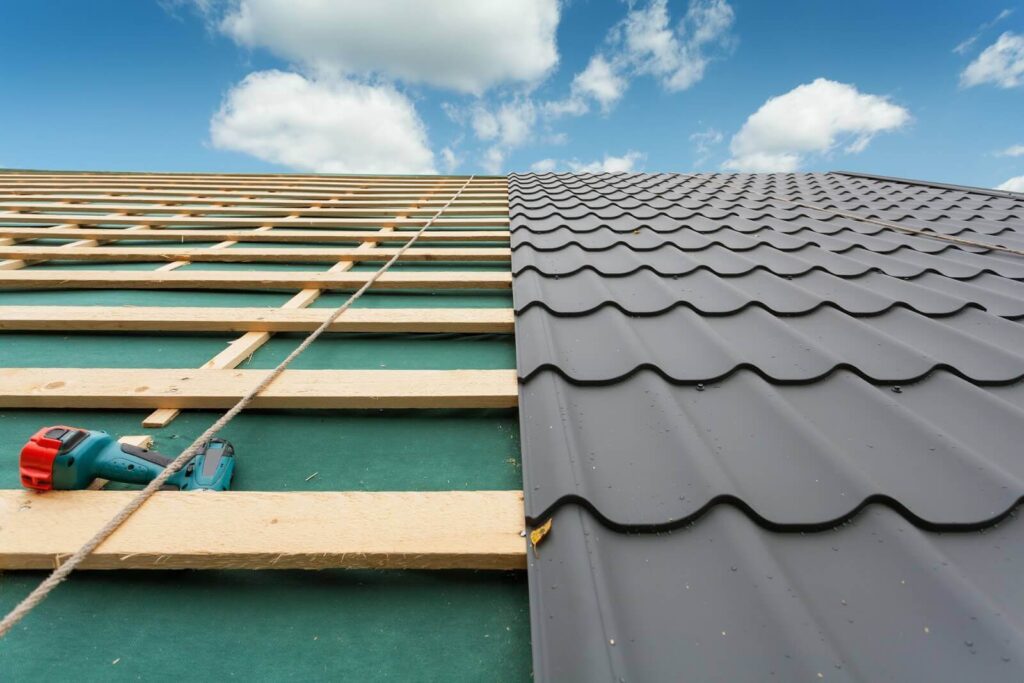 A lot of people get confused between re-roofing or retrofitting and replacements. They’re not sure which one they need and they can’t even tell the differences! To be totally fair, people who have little-to-no experience when it comes to construction would find it a challenge to determine and distinguish, which is which. But, if you know simple facts about them, you’ll wonder why you hadn’t known it in the first place.

Replacement vs. Re-Roofing or Retrofitting

Both procedures are used to improve the current surface or system. However, each of them has distinct differences between one another. The process of Metal Roofing Replacement involves a full disengagement of the current surface or system, covering it up and installing a new one. To give you a concrete example, imagine that your roof is already shredded; it’s already discolored, and it’s only just a brink of time until it collapses. This is the perfect scenario for when you should have it fully replaced.

The old roof would be dismantled and removed, and a new roofing system will be taking its place. Re-Roofing or Retrofitting, on the other hand, involves installing a roof system, putting it on top of an existing one. It’s not technically replacing it, but putting strength, durability, and intensity on the front, covering up the negativities of the current roofing system. A scenario perfect for this would be when your roof has certain damages and scratches that are light. Instead of having them repaired, which can do more hurt than good; and instead of fully replacing it, re-roofing would be the best course of action to take.

Advantages of Re-Roofing and/or Retrofitting

Are there things that are better off done through re-roofing or retrofitting?

Why should you even consider re-roofing when you can have it repaired, even replaced? What are the advantages and benefits of retrofitting?

Since there wouldn’t be full renovations happening, the disruptions on the site would be minimal. No excavations would be made, not a lot of drilling, no taking down, etc. Re-roofing or retrofitting is a procedure done to enhance the current condition of your roof. It’s not going to be totally replaced by a new installation, but rather would be enhanced depending on its current parameters.

Metal retrofitting greatly decreases the maintenance cost of your roofing systems. With a re-roofing done, it can run and can function independently. It’s also going to help you by running on its own, maintain itself for the longest time it can. No more regular check ups for it; and you don’t have to spend for consulting purposes!

The main benefit and advantage that re-roofing or retrofitting can get you. Metal Roofing Replacement and Installation prices can fluctuate greatly; especially when it comes to specialized materials and dimensions. But, if you choose to go with re-roofing, you would be surprised by the amount of savings you will have! It’s energy-efficient, which basically means that you don’t have to spend so much on freshness such as air-conditioning or ventilation. It’s a natural ventilator that can help insulate the environment above you.

Who Should You Trust?

Our knowledge, skill, and overall commitment to our craft enabled us to become the top-rated Metal Roofing Company in the city. We’re so popular and trusted, that even neighboring cities and towns refer to us as their go-to company, too!

Benefits of Working With Elite Metal Roofing Contractors of Clearwater

The wide majority of businesses and commercial establishments in Clearwater, FL consider us as their go-to company. Why? Because of the tremendous benefits that they can get when they choose us for the service. Some of the things that you can get when you choose to work with us include:

Compared to other Roofing Manufacturers and Contractors, Elite Metal Roofing Contractors of Clearwater is dedicated to finish and accomplish any project fast and urgently without the quality being compromised. We regularly let our experts and our professional roofing experts undertake assessments to see how well they can adjust to different situations. This does not only give off high-quality results, but can also allow the project to be done, completed, and accomplished in a jiffy.

Are you tired of the same old color cache that your local roofing contractor is giving you? Work with us here at Elite Metal Roofing Contractors of Clearwater and enjoy a wide spectrum of colors – it includes colors you never even thought to be possible in the roofing industry! We make it to a point that all our colors would befit the expectations of our clients. This is why we’re known in the industry as the most versatile, the most flexible, and the most innovative Roofing Contractors!

Whether it’s raining, snowing, or if the sun is out at its highest, you can bank and count on us here at Elite Metal Roofing Contractors of Clearwater to help you. We’ve devised special tactics, techniques, and strategies that allow us to perform at our best no matter what the weather is!

Aren’t sure if a roofing contractor would be able to accommodate what you’re requesting? Can’t you find a contractor that can help you with your requests in retrofitting or manual re-roofing?

Elite Metal Roofing Contractors of Clearwater is just one call or one email away from wherever you might be in the city. You can count on us and consider us as your go-to roofing company for all the requests you have in roofing.

We are more than dedicated to providing the utmost care and performance to satisfy – even exceed whatever your needs and your goals are.

Talk to one of our representatives today and get the job done without stressing out about the timeframe of when the project will be completed.

Time to Replace Your Roof? We Can Help

Considering roofing replacement? When it comes to roofing projects, many homeowners rely on professionals to get the job done. At Elite Metal Roofing Contractors of Clearwater, our specialists stick to all the industry standards when installing metal roofing on both residential and commercial properties. Therefore, you can be sure of getting a sturdy roof on top of your house. As a result, you can get the best services from our company in the following fields;

What Locations do we Serve?

Elite Metal Roofing Contractors of Clearwater is a name you can trust and rely on. Our metal roofing services were limited in Clearwater, FL when we started. But with time our company has expanded and is now serving over ten locations within Florida.

It shows how reliable we are. Here are some places within Florida, where you can access our world-class metal roofing services: –